Renewables are now
the cheapest
form of energy generation. If all energy use in the UK
was based on electricity, and all electricity was generated by
renewables, our current cost of living crisis would be far less
severe, and of course we would not be adding to climate change.
Furthermore, there is huge potential in the UK (and most other
countries) for far more renewable energy production than we currently
have. So why isn’t this happening faster?

That is the question
addressed in a new
book by Eric Lonergan and Corinne Sawers. In many ways
it is a very optimistic book, because it suggests the problem of
climate change is mainly solvable with known technology, and there
are no insurmountable barriers for doing this with sufficient speed
to enable us to avoid severe global warming. They suggest that the
reason this is not happening is, in part, because we are thinking
about it in the wrong way. 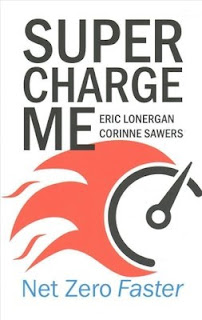 Much of the
discussion around avoiding climate change is framed in terms of
costs. Economists are partly to blame for this, as the debate was
originally framed by economists in terms of what current costs are we
prepared to pay to avoid future costs (global warming). The book
suggests that a better way of thinking about it is as an industrial
revolution, such as the invention of telecommunications. Because
renewable energy is cheaper, we are better off developing it and
phasing out fossil fuels even without the problem of future global
warming. When electricity was first invented, no one talked about the
costs of installing electricity generation compared to future
benefits, because it was obviously a better technology for everyone
concerned.

An economist might
retort that there is always an opportunity cost of investing in green
energy and electrification, because that investment could be used for
something else. In this sense it is always right to talk about costs
and benefits. However in today’s world we have very low long term
interest rates, and yet in many countries private and/or public
investment levels are if anything lower than the past. The trade-off
in many cases may not be between green investment and some other form
of investment, but between green investment and the spending power of
those who own shares in companies.

Another strand of
thinking suggests radical change, like individually consuming less or
eating different foods, or for economies to stop growing, or
fundamentally changing capitalism. Again this makes stopping climate
change seem rather unattractive or risky, and this puts both people
and policymakers off. Framing the problem as a green industrial
revolution to obtain cheaper and more stable energy is much more
appealing.

In terms of doing
this faster, the book suggests looking at what has worked so far,
that has brought us to the point where renewable energy is also the
cheapest energy: a combination of large positive incentives and hard
regulations. Central to their argument are the use of “extreme
positive incentives for change”. These have led to the rapid
reduction in the cost of solar power, and the widespread adoption of
electric vehicles in parts of China, Scandinavia and the US.

Extreme positive
incentives (like providing large subsidies for electric cars or well
insulated houses for example) combine three important pieces of
psychology, politics and economics that are often ignored by
economists. The first is that extreme incentives are much more
effective than marginal incentives, because of the psychological
fixed costs of changing behaviour. The second is that positive
incentives (giving people money to do things) are more effective than
negative incentives (like taxing carbon), because the latter
generates resistance and as a result are unlikely to be pursued
strongly by policymakers.

The third is that
people do not ‘internalise the government’s budget constraint’,
which is the idea behind Ricardian Equivalence. If they did. people
would recognise that incentives had to be paid for by them one way or
another, so positive incentives and taxes would work in the same way.
This doesn’t happen not because people are irrational, but because
it is very uncertain how governments fund incentives, and many of
those methods of funding would not fall on those receiving the
incentive. So people who receive an incentive really are better off,
and those who are taxed are worse off, in terms of expected income.
It is only the fiction of the representative agent (and various
additional assumptions) that leads to the idea of internalising the
government’s budget constraint. [1]

We can see all this
in action when we compare the success of solar power to the many
difficulties governments have had in raising appropriate carbon taxes
(or permits that act like taxes). Carbon taxes make sense in many
ways, because they are the economists’ standard response to an
externality (i.e. a cost imposed on others that isn’t paid for by
the people generating that cost). Climate change is the biggest
externality of our lifetime. Yet in the case of climate change, when
the costs are generated by everyone and the harm they create is in
the future, the psychological, political and economic factors noted
above mean positive extreme incentives are much more effective than
carbon taxes.

All of which brings
me to the title of this post. If extreme positive incentives are what
is needed to speed up electrification and the use of renewables to
generate that electricity, that will cost governments money. Ideally
that should be paid for by higher general taxes rather than
borrowing, because it’s better if the polluter pays. (Equally
richer countries, that have already deposited a large amount of
carbon in the atmosphere, should help pay poorer countries to go
green.) But this ideal may not be feasible in political terms,
because policymakers will resist the idea of tax increases and
therefore will not provide the incentives.

The way to avoid
this problem is to fund green incentives through borrowing. As I have
often said, future generations suffering the effects of substantial
global warming will not think that’s OK because we reduced their
‘burden’ of paying taxes on government debt. Instead they will
positively welcome the borrowing required to reduce climate change in
the past. [2] This is particularly so when that borrowing currently
costs so little.

Which is where debt
and deficit targets get in the way. To see how ridiculous it would be
if they did get in the way, just compare why we need debt and deficit
targets, and compare that to why we need to mitigate climate change.
Deficit targets are useful to prevent irresponsible governments from
buying elections or rewarding donors by tax or spending breaks funded
by borrowing. We need to reduce global warming because otherwise we
will see, for example, large-scale global starvation and migration,
with all the political chaos that this will cause. If you had to
choose between reducing the fiscal behaviour of irresponsible
governments and reducing climate change, which would you choose?

There may be ways of
not choosing between the two. Perhaps we could create two separate
sets of government accounts: a normal account and a green account.
Deficit targets could apply to the former but not the latter. If
Germany can
do this for military spending following Putin’s
invasion of Ukraine, why not do it for spending required to reduce
climate change? [3] Of course there will be many practical political
problems, and it may require a fiscal council with teeth to avoid
governments cheating, but it’s clear we should be at least
discussing this possibility.

If we don’t do
something like this, then we may be faced with a simple choice. Do we
speed up greening the economy to reduce the extent of global warming
using the ideas proposed by Lonergan and Sawers, or do we do what
this government and the media are doing now, and obsess about deficit
and debt targets? The fate of the planet may depend on what people
and governments choose.

[1] In a simple
model with a representative agent, a subsidy would automatically
imply an equal tax today or tomorrow, which will leave the
representative agent no better off, so they would be indifferent
between positive incentives (subsidies) and negative incentives (like
carbon taxes). In reality the tax increases required by any subsidies
may fall on different people from those receiving a specific tax cut
or incentive. In addition tax cuts today may be paid for by cuts in
government spending, which again may not fall on those receiving a
specific incentive, and so on. In other words people see positive
incentives for them as redistribution to them, and taxes on them as
redistribution from them.

[2] The classic case
for funding by borrowing is an investment that doesn’t just benefit
people today, but also benefits people tomorrow. This is why no macro
restrictions should be put on public investment. However many
activities that are not classed as public investment have these
characteristics. A war, for example, is often an investment in the
future, which is why wars are so often accompanied by public
borrowing. Greening the economy also has those characteristics.

[3] Does it make
sense to treat higher military expenditure as different from other
forms of spending? If it represents a one-off increase in spending,
reflecting for example an unusually aggressive ruler in a nearby
country then yes, it is. However if it is seen as a permanent
increase in spending, it is not clear why that shouldn’t be paid
for by the current generation through higher taxes.

A budget that harms everyone except the very rich