What Are Some Cars That Have Low Repair Costs? 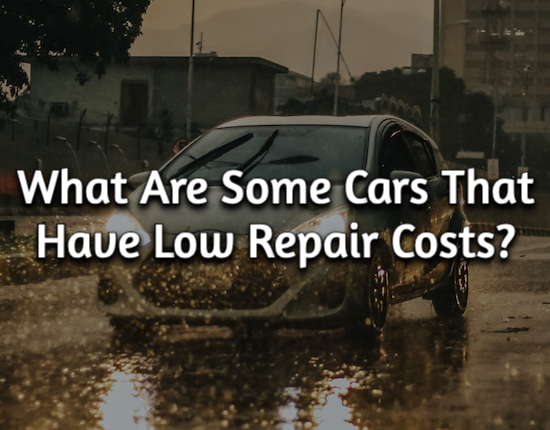 Many drivers are surprised by vehicle repair costs. A vehicle may seem cheap to buy and insure, only to surprise drivers with expensive repair costs.

When shopping for cars, it’s important to compare repair costs. Today, we’re highlighting some of the best cars with low repair costs.

There’s a reason so many rideshare drivers drive a Prius: it’s one of the cheapest cars to maintain and it has good mileage. If you drive a Prius long enough, you may need to pay for a costly battery replacement. Until then, however, the Prius delivers more than 50 mpg of mileage while having annual maintenance costs of around $601 per year, on average. For a newer Prius, you might pay under $200 per year in average maintenance costs, although that rate rises over time.

The Honda Accord provides similar value to the Honda Civic, providing drivers with an affordable, quality vehicle with cheap maintenance expenses. The average Honda Accord driver pays around $732 per year for annual maintenance, on average. Like the Civic, the Accord has spare parts readily available at any repair shop, which means you shouldn’t need to wait long – or pay a fortune – for Honda Accord repairs.

The Honda Odyssey is one of the safest and most popular minivans in America, and it’s no surprise to see the Odyssey make our list of vehicles with cheap maintenance expenses. Most minivans require little annual maintenance, but the Odyssey particularly shines. With expected average annual maintenance of around $521 year, the Honda Odyssey provides unbeatable value compared to other minivans. And, like other Honda vehicles, parts are readily available at any repair shop due to the popularity of the Odyssey.

The Ford Mustang is not one of the cheapest cars to repair overall, but it does have surprisingly cheap maintenance costs compared to other sports cars. The iconic vehicle has some of the cheapest average annual maintenance and repair costs in the sportscar segment, making it ideal for those who want strong performance without spending a fortune every year. Expect to pay around $699 per year for average maintenance on a 5-year old Ford Mustang, according to our research.

The Kia Soul is a cheap, multi-purpose vehicle with low running costs. It’s one of Kia’s best-known and most popular vehicles, and the cheap repair costs make it a favorite among those seeking low overall ownership expenses. The latest Kia model has average annual repair costs of around $454 per year, making it much cheaper than many other makes and models of vehicles on our list. Even after five or more years of ownership, the Kia Soul should continue offering competitive repair costs while delivering high dependability to drivers across the country.

The Hyundai Sonata has average annual maintenance costs of around $601 per year, making it one of the cheapest vehicles in its class for annual maintenance. The car has other popular selling points, including a surprisingly feature-rich interior and a 5-star NHTSA safety rating. With cheap car insurance, cheap repair costs, and a low overall cost of ownership, the Hyundai Sonata offers unbeatable value year after year.

Popular and dependable, the Ford Edge has made cheap repair cost lists for the last decade. The latest models of the Ford Edge continue to offer average to low maintenance expenses. The Ford Edge really shines when compared to other vehicles in its segment, offering some of the lowest overall costs of ownership – including cheap repairs.

Toyota, like Honda, has a reputation for reliability and affordability. The newest Toyota Camry models continue to live up to that reputation with some of the cheapest average maintenance and repair costs in the industry. Expect to pay around $587 per year in average annual repair costs for a five-year-old Toyota Camry, on average. Drivers of newer cars should have few maintenance costs overall.

By shopping around for cars with cheap repair costs, you can save thousands of dollars over the life of your vehicle.