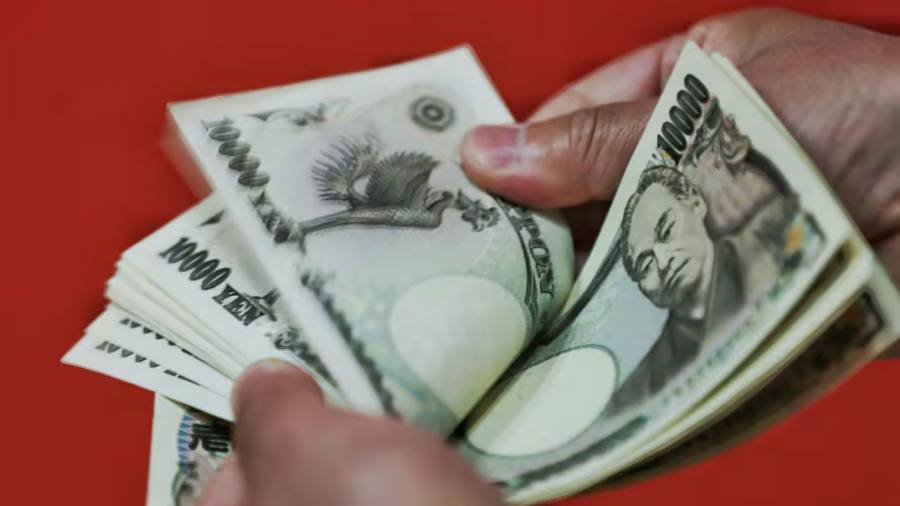 Good morning. This article is an on-site version of our FirstFT newsletter. Sign up to our Asia, Europe/Africa or Americas edition to get it sent straight to your inbox every weekday morning

The Japanese yen fell to a new 20-year low against the dollar on Wednesday, pushed down by expectations that the Bank of Japan will defy global trends and keep monetary policy loose.

The yen dropped as much as 1.4 per cent against the US currency, taking it past ¥134 per dollar. It has declined roughly 4 per cent this month and has in recent days neared its weakest level since early 2002.

The move came after the governor of the BoJ said that consumers had become “more tolerant” of price rises, comments that he later retracted. Speaking at the FT’s Global Boardroom event, Haruhiko Kuroda said that a weakening yen would boost the profits of Japanese companies.

In stark contrast to other major central banks, the BoJ has decided against tightening monetary policy in recent months.

“The dollar has seen a meteoric rise versus the Japanese yen over the past three months as the Bank of Japan maintains a dovish policy stance relative to the Federal Reserve,” strategists at Bespoke Investment Group said on Wednesday.

Thank you for reading First FT Asia — do share your feedback with us at [email protected]. — Emily

Five more stories in the news

1. SEC chief launches review of ‘uneven’ US equities market Gary Gensler has outlined plans for an overhaul of what he described as an “uneven” and unfair US equity market, drawing fire from traders that have flourished under the current system. Gensler said he had asked agency staff to consider significant changes, including a possible auction process to increase competition between services for retail investors.

2. Twitter to share data with Musk Twitter has agreed to share a vast trove of data about the content on its platform with Elon Musk, after the billionaire entrepreneur threatened to abandon his $44bn acquisition of the social media company if it did not provide more information about fake accounts and bots. A shareholder vote on the deal is expected by early August, according to a person familiar with the situation.

3. Iran removed UN cameras from nuclear facility The UN nuclear watchdog board of governors voted overwhelmingly in favour of a resolution criticising Iran for failing to co-operate sufficiently over its undeclared sites after it emerged yesterday that Iran had removed two cameras belonging to the UN atomic watchdog from one of its nuclear facilities.

4. UN warns of hunger risk Hundreds of millions of people are at risk of “hunger and destitution” because of food shortages due to the Ukraine war, the chief of the UN warned, as talks stalled over ending Russia’s blockade of Black Sea grain shipments.

5. Moderna reports positive data for Omicron Covid booster Moderna has said its new two-strain Covid-19 booster increases people’s immunity against the dominant Omicron variant, bolstering the company’s hopes to roll it out as a fourth dose in the late summer. The US biotech company is the first to report preliminary results from a clinical trial of a vaccine targeted to Omicron.

China trade balance figures Data for May is set to be released today. Earlier this week, data showed that the US trade balance narrowed by the most in more than nine years. The drop in imports is likely, at least in part, caused by lockdowns in China due to Covid-19. (Reuters)

ECB ends easy money era When Christine Lagarde sets out the European Central Bank’s plans to end eight years of bond-buying and negative interest rates, she can count on the support of the vast majority of her fellow rate-setters.

January 6 committee hearings On Thursday the House committee investigating the January 6, 2021 attack on the Capitol will share what it has learned. Here’s how to watch. (WaPo)

What else we’re reading and listening to

How space debris could threaten modern life After 65 years of space flight, the area around Earth is littered with 9,000 metric tonnes of debris, according to Nasa, all zooming uncontrollably around at 25,000km an hour. Check out our impressive interactive graphic on the increasing threat posed by space junk.

Blowing the whistle on ESG In this week’s episode of FT’s Behind the Money podcast, host Michela Tindera talks to a former executive who raised red flags on DWS’s misleading claims about its “green” financial products. FT’s Patrick Temple-West joins to explain what this moment means for the future of environmental, social and governance investing. Sign up here to receive our sustainable finance newsletter, Moral Money.

Is the global housing market heading for a downturn? Interest rate rises are cooling house price growth in both Europe and the US, but experts cite several reasons for relative optimism. Experts expect rate rises to end the rapid, two-year surge in house prices and price growth to slow down sharply.

Japan and South Korea seek a relationship reset Quiet discussions are under way to arrange what would be the first meeting of a Japanese prime minister and South Korean president since late 2019, and a chance to set aside historic disputes to focus on the pressing challenges of an emboldened China and nuclear-armed North Korea.

A new pop song represents Iran’s efforts to embrace the young “Hello Commander! Hello from this fearless left behind generation.” The Islamic republic’s latest revolutionary hymn may lack something when it comes to artistic merit, but the government seems to hope it will help create a loyal new generation.

As global economic forces are playing havoc with stock, Leo Lewis recounts his fight with his family over a PS5, and weighs in on the household debate over getting a new console.

Thank you for reading and remember you can add FirstFT to myFT. You can also elect to receive a FirstFT push notification every morning on the app. Send your recommendations and feedback to [email protected]. Sign up here.