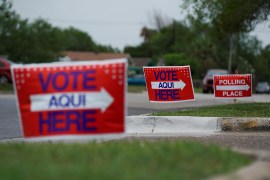 For years, Democrats believed that the demographic changes from immigration would eventually shift the political balance in their favor. Doubts began to emerge in 2016, when Donald Trump improved on Mitt Romney’s performance among Hispanics despite his tough anti-immigrant rhetoric. These doubts intensified in 2020, when Trump made further gains among Hispanics, especially in Florida and South Texas. And now, a just-released poll of likely voters suggests that Texas Hispanics could be breaking away from the Democratic Party in droves.

The poll, conducted by Quinnipiac University, found that incumbent Republican Governor Greg Abbott leads Democratic challenger Beto O’Rourke by 7 points. No surprise there; Abbott is an incumbent in a very Republican state. But here’s a real surprise: the Hispanic vote is divided almost evenly between O’Rourke (49%) and Abbott (48%).

By a wide margin, likely Hispanic voters named the situation at the Texas-Mexico border as their top concern. Many Democratic pundits would regard this focus as an encouraging sign. But when asked who could better handle the border issue, 53% named Abbott, compared to 44% for O’Rourke—a nine-point gap. And despite the national uproar over transporting migrants entering the United States in Texas and Florida to states far removed from the border, a strong minority of Texas Hispanics—48% supported Gov. Abbott’s policy, compared to 51% who opposed it.

To be sure, these voters have a nuanced view of the choice they face. For example, on what for them is the second-most important issue—abortion—they disapprove of the Supreme Court decision overturning Roe v. Wade by 61 to 35%, and they trust O’Rourke over Abbott to handle this issue by a 15-point margin, 54 to 39%. But if the Quinnipiac survey is correct, their doubts about O’Rourke’s approach to the border more than counterbalanced their concerns about abortion.

Relying on a single poll is always risky, and this one is no exception. For example, another recent survey of likely voters by a Texas television chain and the Texas Hispanic Policy Foundation gave Abbott a 7-point lead overall (the same as the Quinnipiac poll), but in that poll O’Rourke led among Hispanics by 14 points, 53 to 39%.

There are broader reasons for caution. In the first place, the criteria for determining “likely” voters are contested among pollsters, and even strategies that have gotten it right in the past may not work this year.

Second, most broad-based polls contain relatively small samples of Hispanics. According to Doug Schwartz, the director of the Quinnipiac Poll, its latest Texas survey includes 161 Hispanics, with a margin of error of 7.7 points, so O’Rourke’s support among Hispanics could be as high as 57%, Abbott’s as low as 40%.

Third, a Telemundo poll of 625 registered Hispanic voters in Texas conducted at about the same time gave O’Rourke a substantial 23-point lead over Abbott, 54 to 31%. But even this poll shows that the share of Texas Hispanics who identify as Democrats fell from 63% in 2019 to just 54% today, with a correspondent rise in Hispanics who identify as Independents. It seems safe to say that Texas Republican candidates have a widening swath of Hispanics who are open to hearing their arguments.

At this point, we cannot know whether the Quinnipiac poll will turn out to be an outlier or an accurate assessment of sentiments among Texas Hispanics. But we do know this: In the 2018 gubernatorial race, Gov. Abbott received only 35% of the Hispanic vote. In the 2020 presidential contest, Donald Trump received 41% of this vote, up from 34% in 2016. If Abbott can improve on these results in November, Texas will likely be out of the Democrats’ reach indefinitely, and Democrats will have more cause for concern about an essential building block of what they hoped would be their new majority.[i]